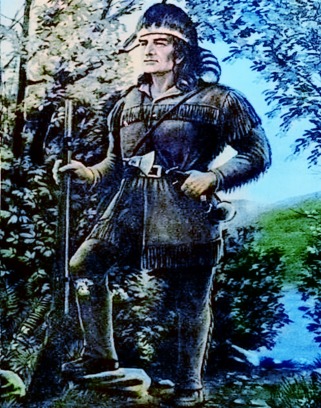 Timothy Murphy’s marksmanship record during the American Revolution may be a blank page to the average reader of American history, but his feats are legendary in the northeastern states where he lived and fought. Empowered with the precision of an expert marksman and the agility to escape from the enemy’s grasp, he never feared capture, and he knew how to stay alive.1

Murphy was born in Minisink, New Jersey, in 1751. His parents, Thomas and Mary, immigrated to America from County Donegal, Ireland, and resettled in Shamokin Flats (presently Sunbury), Pennsylvania, when Tim was eight years old. Murphy spent the latter part of his childhood as an indentured servant to the Van Campen family and matured in the rugged wilderness of the Wyoming Valley in Pennsylvania. It was there that he learned to hunt and target shoot and where he later mastered the guerrilla tactics utilized by Native American warriors.2

On June 14, 1775, Congress called for expert riflemen from the frontier regions of Maryland, Pennsylvania and Virginia to assist the newly formed Continental Army in the fight for America’s independence from the British Empire. Timothy and his brother, John, enlisted in the Pennsylvania Rifle Regiment under Captain John Lowdon and Colonel William Thompson.3 Marksmanship and frontier survival tactics learned through necessity separated the rifle regiment from regular soldiers. Dr. James Thacher later remarked in his journal,

“These men are remarkable for the accuracy of their aim…A company of them, while on a quick advance, fired their balls into objects of seven inches diameter, at a distance of two hundred and fifty yards…their shots have frequently proved fatal to British officers and soldiers…even at more than double the distance of common musket shot.”4

As part of the regiment, Murphy participated in some of the most famous campaigns of the American Revolution, including the Siege of Boston and the battles of Long Island, Princeton, and Trenton.5

In June 1777, Murphy was one of 508 men selected to join an elite light infantry unit made up entirely of sharpshooters known as the Provisional Rifle Corps.6 Led by Colonel Daniel Morgan, a brilliant battlefield tactician, the PRC would become known as Morgan’s Riflemen. Commander in Chief, General George Washington, wrote to the governor of New York, George Clinton, that these men were specifically chosen because of their expert use of rifles and their distinguished actions in skirmishes with the enemy.7

While regular Continental troops were armed with standard muskets, the sharpshooters were equipped with flintlock long-range rifles designed for distance and accuracy. The infantry’s smooth-bore musket was fitted with a long steel bayonet and could be loaded and fired four times a minute, but the trajectory of the small-bore bullet as it scraped against the muzzle was erratic. A hit at sixty yards was a lucky strike. The sharpshooters’ rifles were lighter and much easier to operate. The larger caliber bullet spinning through the barrel’s grooved interior traveled at a higher velocity and for a greater distance than the musket. However, they did not have bayonets and were slower to load.8 Timothy Murphy used his own custom-made double-barrel rifle during the war, which enabled him to fire two consecutive shots before reloading.9

Employing guerrilla-style tactics, Morgan’s Riflemen would fire from concealed positions in the woods or fields, shooting officers and their Indian guides first. It was thought that without capable leadership and direction, British ranks would break down in chaos and confusion. British soldier, Roger Lamb, lamented, “The dexterity which by long habit they had acquired in hitting beasts…was fatally applied to the destruction of our officers. From their fall, much confusion was expected; they were, therefore, particularly singled out.”10

On October 7, 1777, heavy fighting broke out along Bemis Heights, just south of Saratoga, as the British attempted to overrun American defenses. Allegedly, Colonel Morgan instructed his ace sharpshooter, Sergeant Murphy, to eliminate Brigadier General Simon Fraser, the British officer leading the assault on the heights.11 Timothy climbed up a tree overlooking the battlefield and aimed his rifle at General Fraser, who was riding on horseback across a field 300 yards away. The first and second bullets hit the horse’s saddle and mane. The third shot struck General Fraser, throwing him off his horse, mortally wounded.12 Fraser died the next morning but not before he told those around him that he saw the rifleman shoot him from a tree.13 It is also reputed that a fourth round killed Sir Francis Clerke, chief aide to British General John Burgoyne. Clerke was carrying a message for the British to withdraw, which was never received. This claim has never been substantiated. However, both incidents led to further losses for the British and an eventual victory for the Continental Army.

Murphy’s legendary role in this battle has produced minor variations in the telling and has been a topic of controversy among researchers, while others refute Murphy’s role altogether.14

Rejoining the Continental Army, Sergeant Murphy and his comrades endured the harsh winter conditions at Valley Forge, Pennsylvania, and later partook in a series of harassing attacks against British forces retreating from Philadelphia. From 1778 to 1780, Murphy spent most of his time defending the Frontier in upstate New York where American troops garrisoned a series of forts along the Schohaire Valley. During this period, he made a name for himself fighting Native American tribes allied to Great Britain and Tories or Loyalists, American colonists loyal to the British Crown.

In October 1780, Murphy found himself stationed at Middle Fort near Middleburgh, New York, when a force of roughly 1,000 enemy troops made up of British regulars, German mercenaries, Native American warriors, and Tory Loyalists began sweeping down the valley from the north. American troops inside the fort found themselves surrounded and outnumbered by a superior enemy force. Since the walls were too thick to be breached by cannons, the British attempted to compel the Americans to surrender.

Although the fort’s commander, Major Melancthon Woolsey, was fully prepared to give in, Sergeant Murphy had no intentions of conceding defeat. When an officer of the British Loyalists approached with a flag of truce, Murphy fired at the flag, and the officer retreated. A second attempt by the Loyalist officer resulted in Murphy again firing at his flag against his commander’s orders. This time, Major Woolsey ordered his men to arrest Murphy for insubordination. The men refused. Frustrated by Murphy’s actions, Woolsey ordered the hoisting of a white flag, but Murphy wasn’t having it, threatening to shoot any man who dared to obey. Murphy prepared to shoot at the flag bearer, who was approaching a third time, when Woolsey pulled out his pistol and threatened to shoot Murphy on the spot. The defiant Irish sharpshooter looked his commander in the eye and famously proclaimed, “I will die before they have me prisoner.”15

Suffering a nervous breakdown, Major Woolsey relinquished command to a militia leader. Unable to capture Middle Fort, British forces conducted a scorched-earth policy through the valley before retreating to Canada. While the agricultural damage to the area was severe, local colonists soon returned to rebuild the Schohaire Valley.

Murphy reenlisted in the Continental Army and took part in the Yorktown Campaign of 1781. He was present when British forces under General Charles Cornwallis surrendered at Yorktown, Virginia, on October 19, 1781.16

Timothy Murphy died of cancer in 1818 at the age of sixty-seven. His body was transported to Middleburgh Cemetery in 1872 and buried next to his first wife, Peggy. A bronze monument was later erected at his grave site. In 1913, a memorial marker was dedicated at the Saratoga National Battlefield by the Ancient Order of Hibernians.

While Governor of New York, Franklin D. Roosevelt spoke at the dedication of a memorial in his honor at the Saratoga National Battlefield in 1929. The future President of the United States stated:

This country has been made by Timothy Murphys, the men in the ranks. Conditions here called for the qualities of the heart and head that Tim Murphy had in abundance. Our histories should tell us more of the men in the ranks, for it was to them, more than to the generals, that we were indebted for our military victories.17

His life became the subject of a 1953 novel, The Rifleman, written by John Brick.